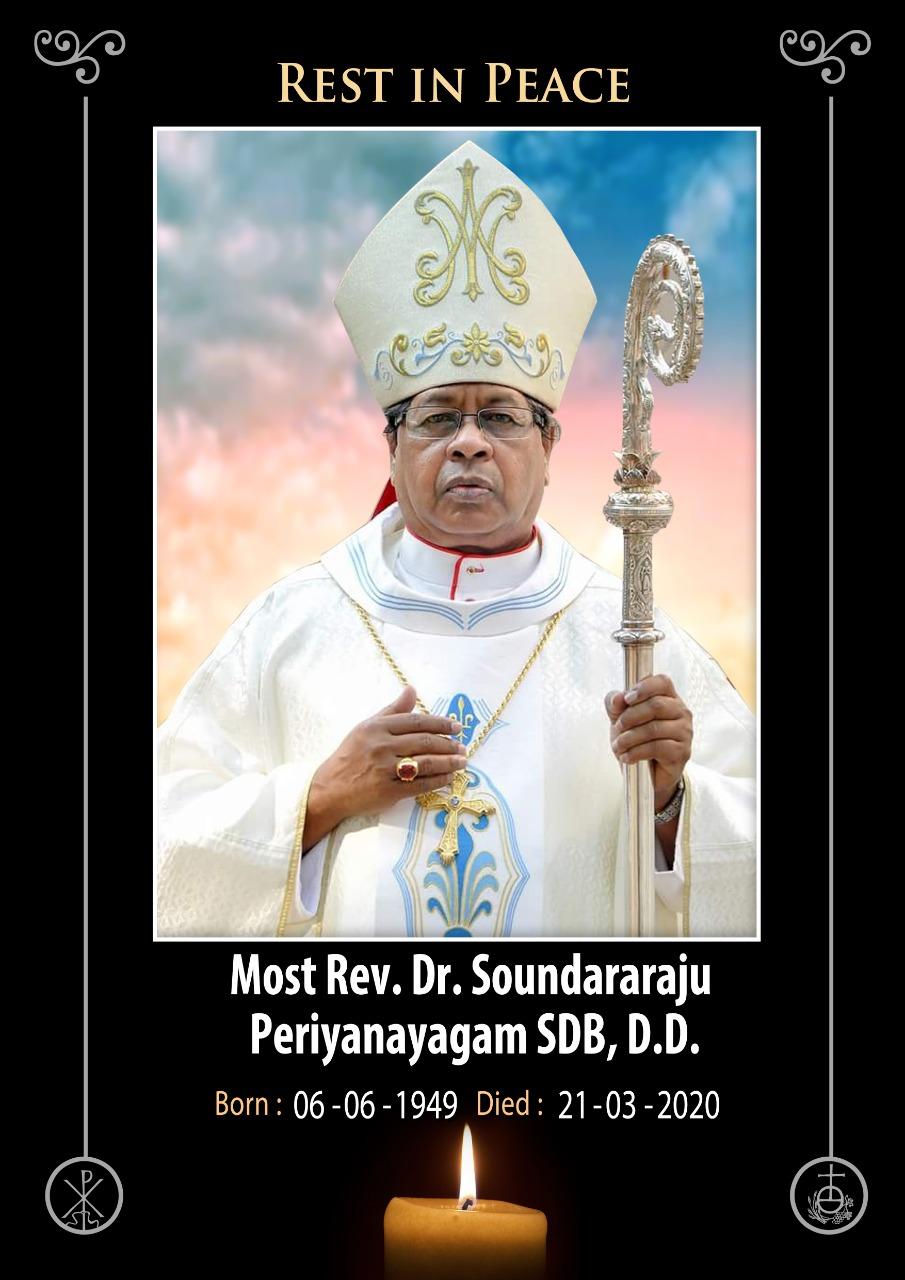 Bishop Sounararaju Periyanayagam SDB of Vellore is no more. He was admitted in The German Hospital, Chetpet a few days ago as he was not feeling well. Early morning on 21st March he suddenly collapsed due to a massive heart attack. A requiem mass was celebrated and the body was taken to Kolapalur, his native village where another mass was celebrated for the repose of his soul. Then the body was taken to the Christian Medical Hospital, Vellore to be kept in the mortuary till the Funeral Service, tentatively fixed on 25th March 2020 at 10 a.m. in Assumption Cathedral, Vellore.
He did his practical training at Sagayathottam from 1972 to 1974. He served as a Professor and Vice Principal of Sacred Heart College, Tirupattur from 1983 to 1988 and again from 1991 to 1994. He became the Principal of the same college in 1994 and served that institution in that capacity till 2000. In 2000 he was appointed as the Moderator of the Provincial Chapter which was held in 2001. From 2001 to 2004 he served the province as the Rector and Parish Priest of Lourdes Shrine, Perambur, Chennai. In 2004 he was appointed as the Rector of Don Bosco, Gandhinagar.

Soundararaju Periyanayagam was born to Mr. D. Periyanayagam and Mrs. C. Bernath on 6th June, 1949 at Periya Kolapalur, Vellore District. He was the eldest of the eight children, five brothers and two sisters. After finishing his elementary school in his own village, he first joined Don Bosco High school, Gandhinagar as a boarder and completed his VI and VII Stds. He did his VIII and IX Stds at Subramani Sastriar High School, Arani staying at his uncle’s house. He then continued his studies at Don Bosco High School, Pannur and completed his X and XI stds. He joined the Salesian House, Tirupattur as an aspirant in 1967 and did his Pre-University studies at sacred Heart College, Tirupattur. He joined the Salesian Novitiate at The Retreat, Yercaud in 1969 and made his first Profession on 24th May, 1970 at Yercaud. He made his Perpetual Profession at Yercaud on 10th June 1977 in Bangalore. He did his Bachelor’s Degree in Economics at Sacred Heart College, Tirupattur and his Master’s Degree in the same subject at Loyola College, Madras. Later he did his Master’s Degree in Theology at Ushaw College, United Kingdom. After becoming a priest, he completed his Doctoral studies in Economics at the Bharathidasan University, Trichy. He was ordained a priest on 25th June, 1983 at Manchester, United Kingdom by Most Rev. Dr. Anthony Hitchen, Auxiliary Bishop of Liverpool.

Bishop Soundararaju Periyanayagam of Vellore died of a massive heart attack on March 21 2020. The 70-year-old Salesian Prelate was undergoing treatment for cardiac problems at Thomas Hospital, Chetpet, Vellore, Tamil Nadu, when the death occurred at 12:15 a.m. Bishop Periyanayagam was born on June 6, 1949, at Kolappalur, Tiruvannamalai, Tamil Nadu. After his school studies, he joined the Salesians and made his First Profession on May 24, 1970. He was ordained a priest on June 25, 1983, at Manchester, England, United Kingdom. He was appointed the sixth Bishop of Vellore Diocese on July 11, 2006. His Episcopal Ordination was on August 24, 2006. He had a B.A. in Economics from Sacred Heart College, Tirupattur, M.A. in Economics from Loyola College, Chennai, M.A. in Theology from Ushaw College, Durham University, UK and Doctorate in Economics St. Joseph College, Bharadhidassan University, Trichy. He was the Professor and Vice-Principal (1983-1988 and 1991-1994), of Sacred Heart College, Tirupattur; Principal (1994-2000), in Sacred Heart College, Tirupattur, Rector and Parish Priest (2001-2004), in St. Lourdes’Shrine, Perambur, Chennai, and Rector (2004-2006), in Don Bosco, Gandhinagar, Vellore, before becoming the Bishop of Vellore. He was a priest for 36 years and a Bishop for 13 years.

Bishop Soundararaju was known for his administrative skills. He always preferred team work in administration. Even as a Bishop he followed this principle. He was a very out spoken person who would not mince words when he pointed out things that were going wrong. He was not easily intimidated by threatening circumstances but he had absolutely no animosity against anyone. He would easily forgive and even have compassion for those who misunderstood him or even misinterpreted him. He was known for his deep friendship and loyalty to his friends. It is no wonder that he had a very large group of friends. He helped many young boys to come out of suicidal tendencies by listening to them and counselling them. He would go out of his way to help the needy especially the poor young. He was generous. He wanted the religious working in his Diocese to focus their ministry on behalf of the poor and the marginalized. We are sure that the Lord has welcomed him with open hands his servant saying, “Whatever you did to the little ones, you did it to me.” May he rest in peace!