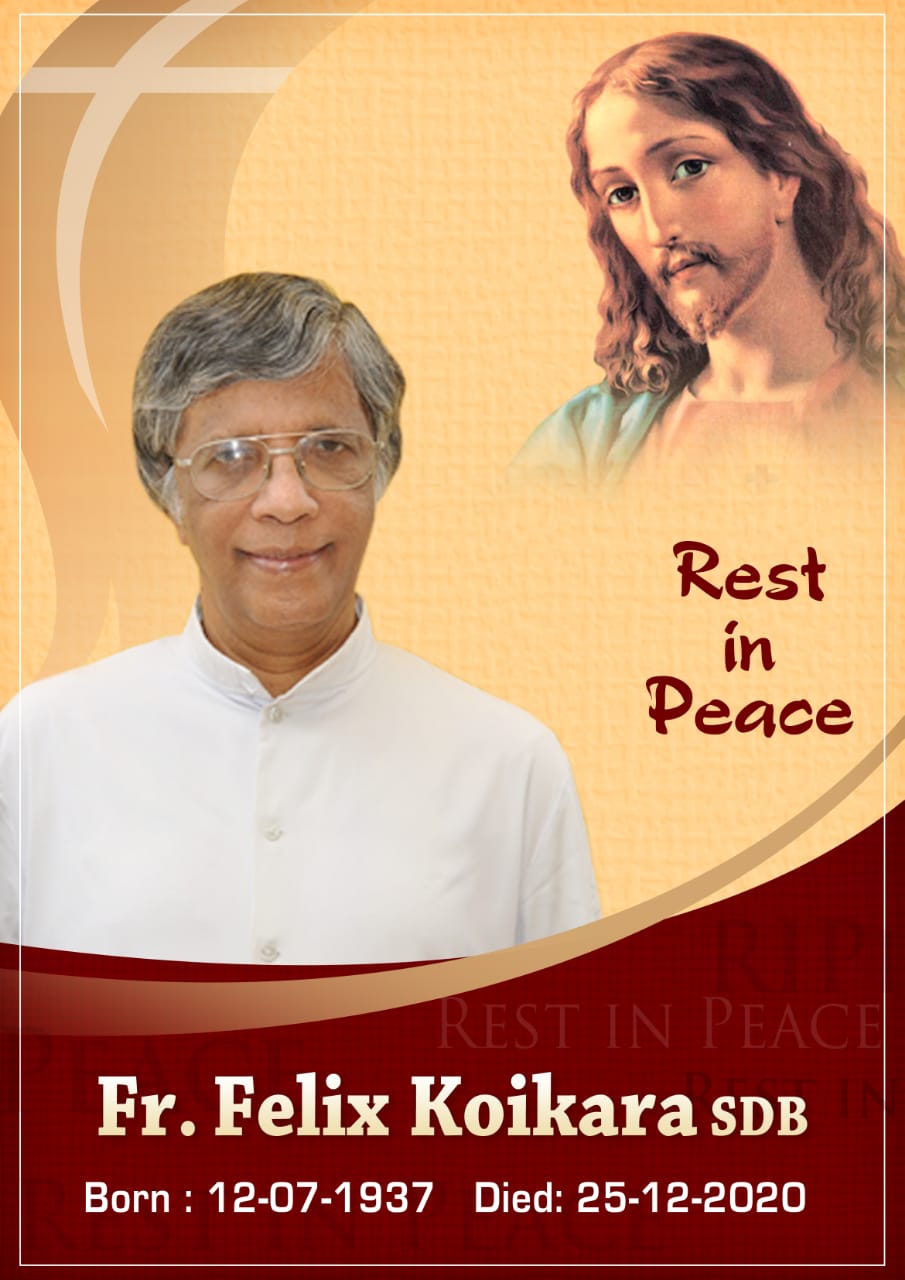 Fr. Felix Koikara SDB, the well-known Youth Worker and Youth Animator, returned to the Father’s House at 4.30 p.m. on Christmas day, 25 December 2020. He was 83 years old and was a Salesian for 62 years and a priest for 52 years. In his passing, the Salesian Province of Chennai has lost a great friend of youth and youth workers. He is remembered as one who contributed substantially to the development of youth ministry in the church in India. Youth ministry was his great passion.

Born in Kerala, on 12 July 1937, he joined the Salesian House of aspirants at Tirupattur in 1951. After completing Matriculation and College (Intermediate) he entered the Salesian Novitiate at Yercaud in 1957 and professed as a Salesian on 24 May 1958. He was ordained a priest on 20 December 1968.

An experienced youth animator and trainer, Fr. Felix has done extensive work with youth and educators in India and abroad. He has trained thousands of youth workers and given hundred of seminars on human relations, leadership and youth ministry all across India and in several other countries. It is estimated that he has conducted more sessions for youth and youth ministers than probably anyone else in India. Author of several best-selling books on value education and youth ministry, he was the founder of the Don Bosco Youth Animation Centre at Ennore, Chennai. He trained in psychology, youth ministry and counselling in India, UK and USA.

When the United Nations declared the first International Year of Youth in 1985, Fr. Felix, along with Fr. Joe Mannath, brought out a Youth Workers Resource Book, which became an instant bestseller and went out of print quickly. Twenty-five years later, when the UN declared the second International Year of Youth in 2010, the same two authors brought out another Resource Book, titled, “Do it. Learn it. Live it. A Book for Teachers and Youth Workers”, published by Asian Trading Corporation. Other books by Fr. Felix include: “Live Your Values – a Resource Book for Value Education (Teacher’s Guide) and another volume “Live Your Values - Student’s Workbook” containing strategies for Value Education, Exercises, Games, Groupwork, Quizzes, Puzzles, Tests, etc.

As a person, Fr. Felix was known to be a perfectionist who worked with singlemindedness. The secret of his prodigious energy and passion for youth work that extended over half a century was the inspiring dictum of the second-century theologian, St. Irenaeus, “The Glory of God is a Person Fully Alive” which he made his personal motto and the motto of the Youth Animation Centre he built up at Ennore, in Chennai. In different ways he sought to make young people and their animators “fully alive” and thus bring honour and glory to their Creator, imitating Don Bosco, the saint of the young. May his soul rest in peace.