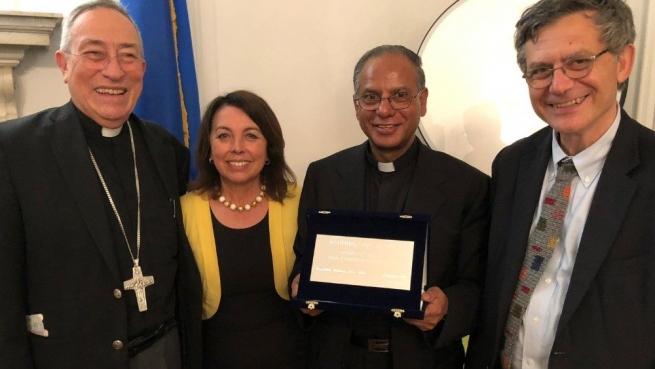 (ANS - New York) – There was a large audience last Wednesday, June 19, at the Consulate General of Italy in New York, for the awarding of Indian Salesian Fr Abraham Kavalakatt with a Plaque of Merit from the "Pantheon Foundation". The prize was awarded to him for his voluminous book: "Wonderful ways of God. The teaching of the Church on the salvation of non-Christians."

A rich parterre of illustrious guests was present, from the Consul General of Italy, dr. Francesco Genuardi, to cardinal Óscar Andrés Rodríguez Maradiaga, archbishop of Tegucigalpa, dr. Paolo Ruffini, Prefect of the Vatican Dicastery for Communication, to prof. Luigi Frati, former Rector of the Sapienza University of Rome.

The Salesian's book, published by the Libreria Editrice Vaticana, one year after its publication continues to arouse an interest that is higher than expected. "Everyone is looking for God in some way and the question of salvation," Fr Kavalakatt explained. "It is a theme of strong resonance, today as well as before the Second Vatican Council, which produced studies, involved experts and theologians and which had a gradual historical development."

The text gathers in 750 pages the teachings of the Council Fathers of Vatican II and then the pontifical Magisterium of John XXIII, Paul VI, John Paul II, Benedict XVI and Francis, reporting also the echoes, the adhesions and the criticisms raised, internal and external to the ecclesial community.

As Cardinal Maradiaga pointed out, the text represents an in-depth and valuable work on the "relationship between theology of religions and salvation of non-Christians, which has become more acute since Vatican II." "The Magisterium, naturally," the cardinal added, "did not stop at the Council" but "in relation to the theological discussion and with the increase in interreligious dialogue, in different spheres and at different levels, the Popes continued teaching on these issues ... And as often happens "after the magisterial pronouncements, theological reflection takes up again and deepens the topics dealt with."

Among "the most moving and innovative pages", "in the path of grace and salvation in Jesus Christ who reaches 'others' (non-Christians) in 'wonderful' ways'," the cardinal pointed out those dedicated to the most recent teachings of Pope Francis, where it is easily understandable that "the door of salvation is narrow, but always open to all."

The appointment was an occasion for reflection and debate on the search for God and the possibility of salvation in Christ, offered to all men and women.