13 New Deacons in HIS Service 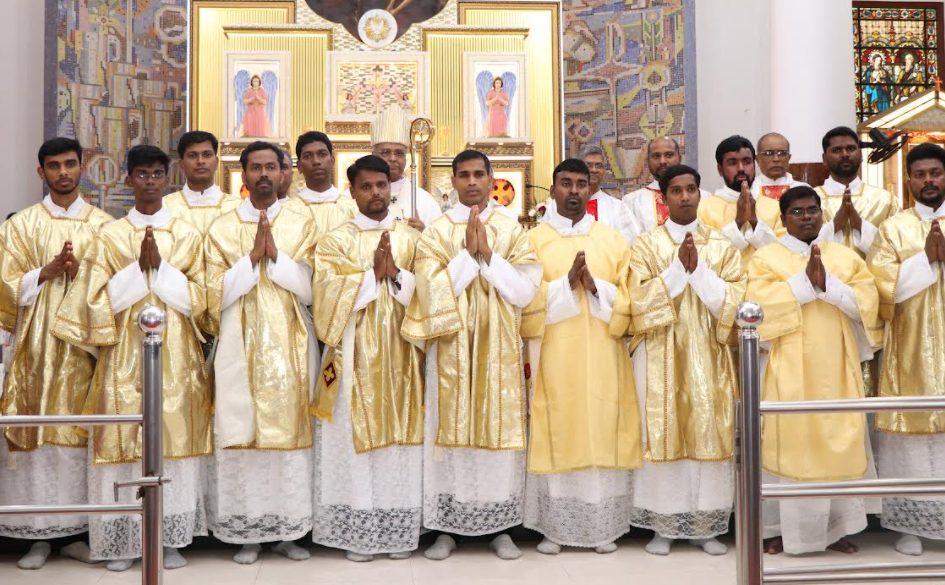 The solemnity of St. Joseph, 19 March 2022, was a great day of jubilation for the Province of Chennai as seven brothers of INM, four brothers of INT and two Josephites brothers were ordained as Deacons by Most. Rev. Dr. George Antonysamy, the Archbishop of Madras- Mylapore at St. Mary’s Co-Cathedral, Chennai. Rt. Rev. Dr. Jeromedhas Varuvel SDB, the Bishop Emeritus of Kuzhithurai, who was the Novice Master earlier, also joined the Eucharistic celebration, as 11 newly
ordained deacons were his own novices! Rev. Fr. Bellarmine Fernando, Rector of Don Bosco Theological Centre welcomed both the Bishops and Rev. Fr. K.M. Jose SDB, the Provincial of Chennai Province (INM), Rev. Fr. Agilan Sarprasadam SDB, the Provincial of Tiruchy (INT) and all those who were gathered for the Eucharistic celebration. In his homily, Archbishop George Antonysamy highlighted the great quality of a deacon who needs to constantly embrace the up-dimension with God, the in-dimension with the community and the out-dimension with the people that would help him to totally belong to God.