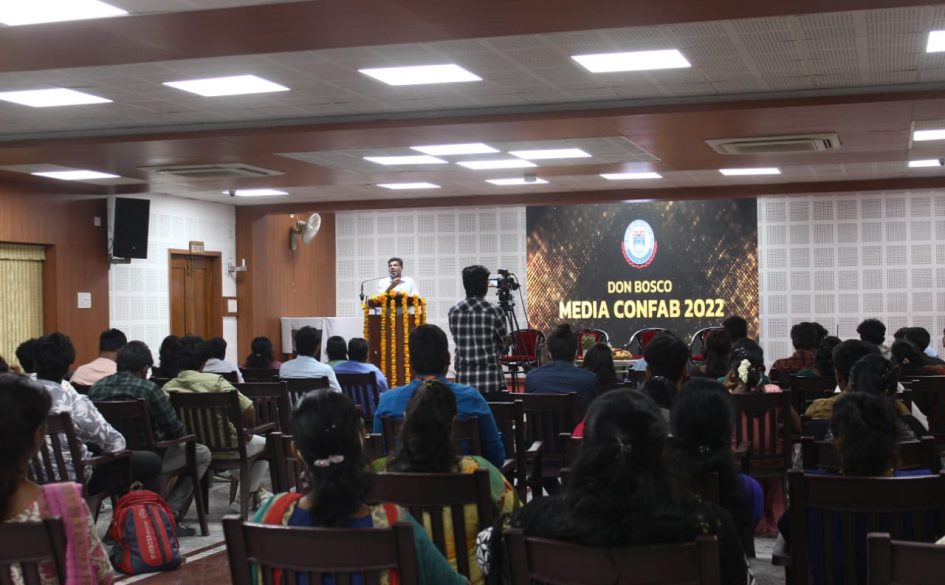 With the end of semester examinations and students making a shift into the next step of their life, taking up careers in the industry, to equip the students with the media skills driving the Job Market, the Department of Visual Communication, Don Bosco Arts and Science Collegeorganized “Don Bosco Media Confab 2022” - a one day seminar for the all undergraduate students to meet and interact with top experts from the Media Industry and
directlylearn from them, the contemporary trends in the field of Advertising, Radio and Television.

The Seminar started with TamizhThaaiVazhthu and Ms. Divine Rizia, member of faculty, Department of Visual Communication welcomed the speakers of the day. First session by Mr. Saju David focused on Television Production. He shared with the students his experiences as a successful show producer and the setbacks and hurdles he faced during the journey. He also insisted on the needof taking up professional media courses to learn in-depth details in the process of production and explained the history of the course “Visual Communication”. He went on to highlight the ideas of priming and framing in Television to create a sense of hype
and how it can make a difference to the shows and it’s ratings.

The second speaker, Mr. Mark Manuel gave his insights on making ad films. He spoke in detail about the filming of his Tata Gluco Plus Ad which was his longest shot ad withthe set of 1 crore budget and about how the shoot prolonged for 6 days. He explained the technicalities involved in the production of ads and how students have to equip themselves to meet the standards.

Next up, was Mr. Joseph Francis, popularly known as Josie in the advertising field. Mr. Josie, with more than 26 years of experience in Advertising, spoke about the past, present and future of Print Advertisements. He came up with slides on classic advertisements of the past and emphasized on the importance of copy writing. He left a copy of “THE COPY BOOK” which according to him is the Bible of Advertising, with the college for the students to make use of.

The last session of the day was by Mr. Antony Cleetus Xavier. Mr. Cleetus engaged the students with a very lively interactive session on Radio Broadcasting. He explained the concept of short wave and inscribed the idea of establishing a community radio within the campus. The seminar was concluded with a Vote of Thanks by Ms.Sanjana Muralidharan, Assistant Professor and Head, Department of Visual Communication. The seminar was highly informative and a thought provoking one. It was well appreciated for the choice of speakers. The students were able to gain rich insights into the newer areas in Advertising, Radio and Television.