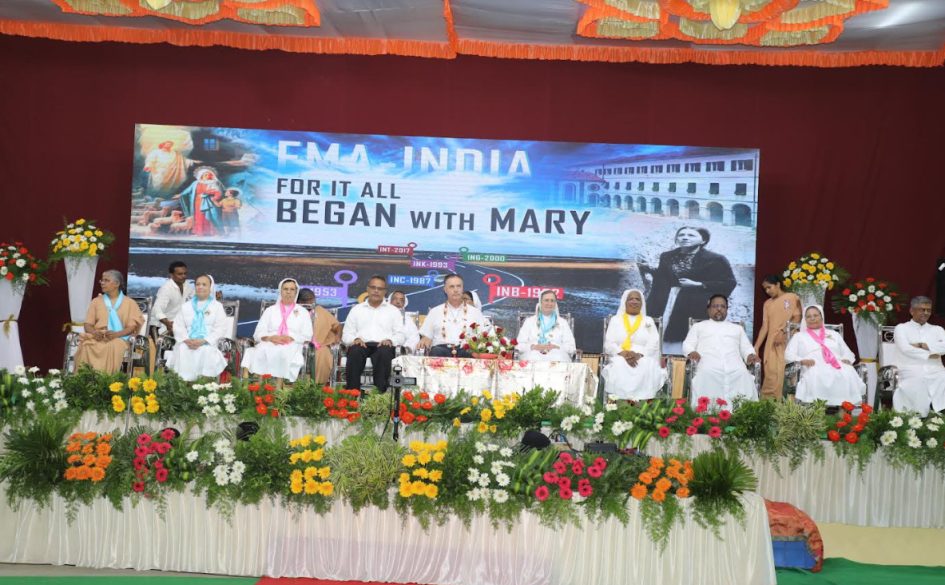 The FMA centennial cultural bonanza took place on 3 rd September 2022 at the Auxilium college, Katpadi in the august presence of the Rector Major, Mother General, General Councillors, SDB and FMA Provincials and other dignitaries.

The event opened with a solemn guard of honour accorded to the Rector Major and Mother General by the students of the Auxilium College. The Programme began with a prayer dance by the province of Bangalore, followed by the Welcome Dance by the Province of Trichy. Sr.Nirmala Lazar the Provincial of INM and the President of the FMA Provincial Conference of India gave the welcome address and welcomed the gathering. She also felicitated the present and the past mother provincials of the seven FMA provinces in India.

Three books were released in the presence of the mother general which were authored by the salesian sisters themselves on various topics namely Mother Mary, Pioneering Missionary Sisters and Social Ministry. On this auspicious occasion, seven sisters from the seven FMA provinces were given Life achievement awards for their untiring and selfless service in the field of education, medicine and women empowerment.

Mother general thanked the pioneering missionary sisters for this beautiful charism that has been sown and nurtured during this hundred years in India, specially to the poorest of the poor women. She also thanked everyone who brought up the provinces to the greater heights. She invited everyone to preserve and develop the Salesian charism which is a gift from God. The Rector Major in his turn expressed his gratitude and appreciation to the Salesian sisters for their centenary milestone. He surprised everyone by singing two Spanish songs as he was playing the guitar. Fr. Biju Michael the regional councillor thanked the FMA sisters for keeping the Salesian flame ever burning in India and at the world at large. Mgsr. John Robert, the Vellore diocesan administrator thanked the Rector Major, Mother General and her council, along with the present FMA mother provincial for their untiring service in the development of the poor in the diocese of Vellore.

The whole programme was interspaced with a variety of cultural programmes from each of the provinces. The centenary scholarship also was inaugurated during this occasion and was distributed to some of the students on the stage. The evening concluded with the splendid presentation by the FMA Chennai province who recapacitated the centenary theme through dance, mime and singing and It was a fitting memory to commemorate the FMA 100 years in India. More than 5000 people participated in this Centenary Cultural Bonanza.