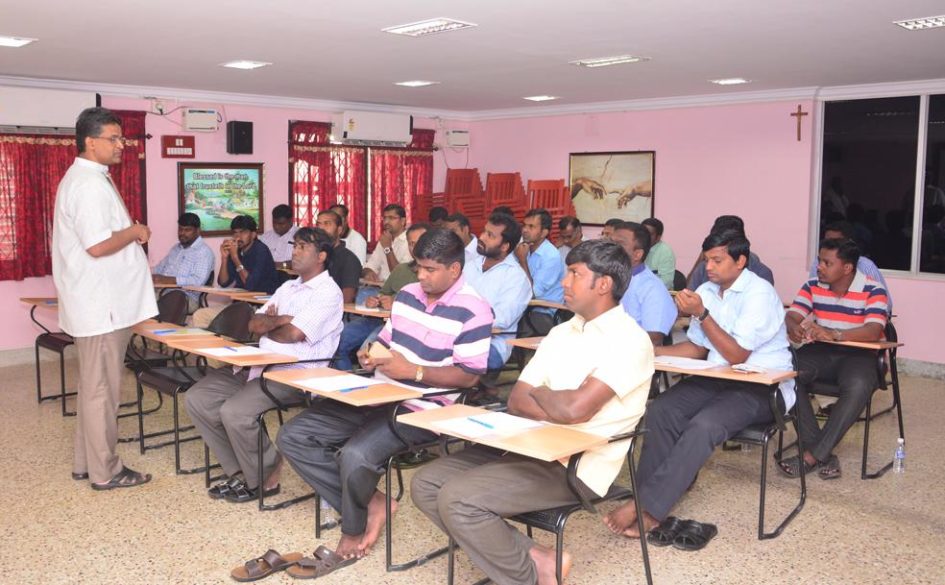 A meeting was organised under the leadership of Fr. Don Bosco, Vice Provincial of Chennai Province, for young priests in their first five years of ordination (Quinquennium). Thirty-three young priests attended this meet on August 7 and 8, 2017 at The Citadel, Chennai.

Fr. K. M. Jose, the Provincial, Fr. Maria Charles and Fr. Simon Robert were present at the inaugural session. In his opening address, the Provincial reflected and shared with the young priests on the resolutions of Don Bosco, that he had taken on his ordination. Fr. Economer gave some insight on accounting and the importance of it. In particular, he said, “A new paradigm is in financial management”.

Fr. Maria Charles and Fr. Robert Simon, were the designated animators for both days. Fr. Simon, referring to the present scenario of youth around the world and particularly in India and Tamilnadu asked the priests to write about the positive and negative qualities of young people of today. The presentation was with lots of statistical information and research on status of youth in today’s life.

After this session, the whole group was divided into four and was asked to prepare a chart stating the three major problems of the young people, which was followed by a short discussion. In the next session Fr. Charles explained and clarified the text book on “The Youth Ministry: A frame of reference”.

There was an interesting programme called ‘Youth talk’, wherein the past pupils of the institutions were called to share their experiences on the contribution of the ‘present youngsters’ to the society and their achievements. Mr. Kumar, Mr. Prakash  (Namal Mudium) and Mr. Murali from Basin Bridge Youth Center were all grateful to the Salesians who were instrumental in bringing out their talents and helping them when they were in need. After having learnt from the Salesians, they work for the poor young people in the society and fighting for their causes through various means.

In the second day’s session Fr. Charles animated the group with a game called ‘Blind folded’. Later he continued the discussion on ‘Youth Ministry’ and emphasized the importance of ‘planning’ which is very much in need for the effective functioning of the Youth Ministry at each sector, province, community and individual. It was further explained in detail that, with the format of EPP & SEPP, it will enable every Salesian to focus in one direction and to achieve the goal, which is, to evangelize and to educate the youth through ‘a planned and a systematic youth ministry.’